Come find me at the Baltimore Comic Con September 25-27th! I’ll be hanging out in the Kids Love Comics area. Table #3028 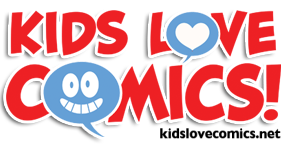 Check out this neat ventriloquist dummy I found in the thrift shop! 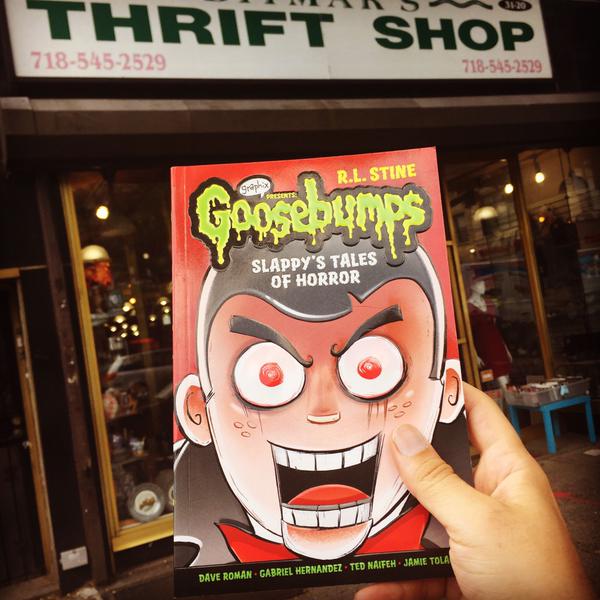 That must mean that Goosebumps Graphix: Slappy’s Tales of Horror is in stores now! The book features four creepy stories including my comics adaptation of “Night of the Living Dummy,” the classic tale by R.L. Stine that introduces the world’s most villainous ventriloquist dummy! You’ll definitely want to know Slappy’s full origin before you see the new Goosebumps movie with Jack Black! Being prepared is you best defense in warding off evil puppets.

You’ve Got The Tide!

Featuring animation by Denver Jackson and music by Eliot Drozd.

The Race for Boatlantis webcomic is serializing now for free! We have to take it down when the book comes out in September. So now is you chance to check it out and help us spread the word! 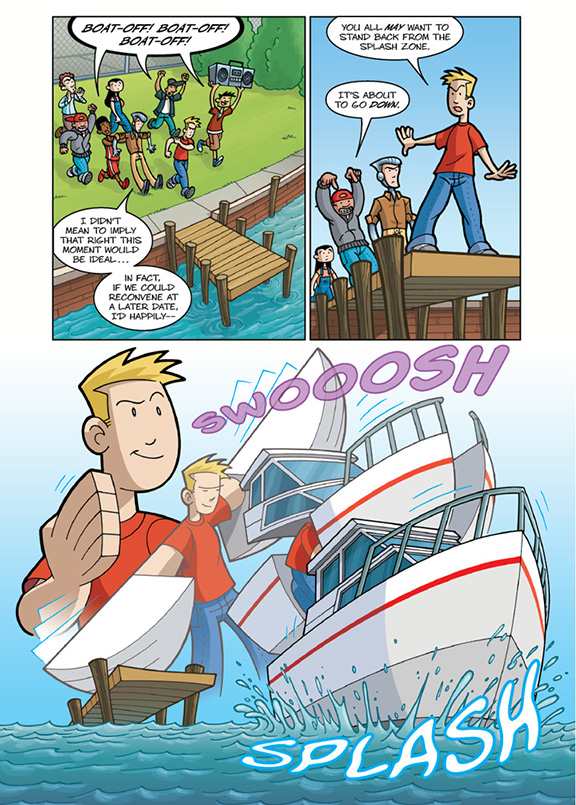 This year I’m an official guest of Comic-Con International! This is a huge honor! I’ve been going to Comic-Con since I was a teenager!

I’ll have a table in the ARTIST ALLEY section, which is where you can find me for most of the convention (look for the Teen Boat banner).

This my list of panel appearances and other places you can find me.

**THIS IS MY FIRST EVER SPOTLIGHT PANEL! It would be the coolest to see you there!

2PM-3PM Signing at the :01 First Second Booth #1323
I’ll be signing copies of the Astronaut Academy books at my publisher’s booth.

I had a great time at the Learning Lamp Children’s Book Festival in Johnstown, PA! Thanks everyone who came by to say hi, share artwork and collaborate in the drawing games! It was especially cool, getting to hang out with authors, Greg Pizzoli, Zachariah OHora, & Mark Weakland! I left feeling super inspired to get to work on some new books! 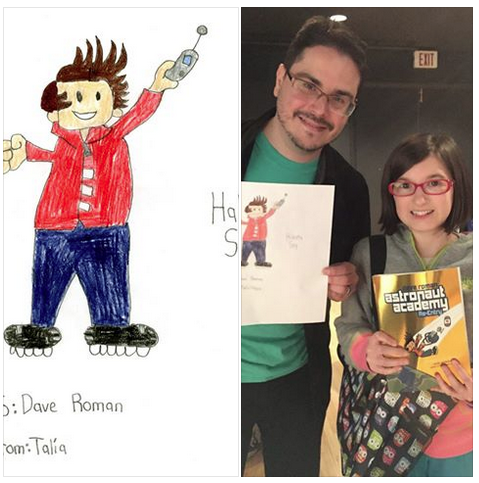 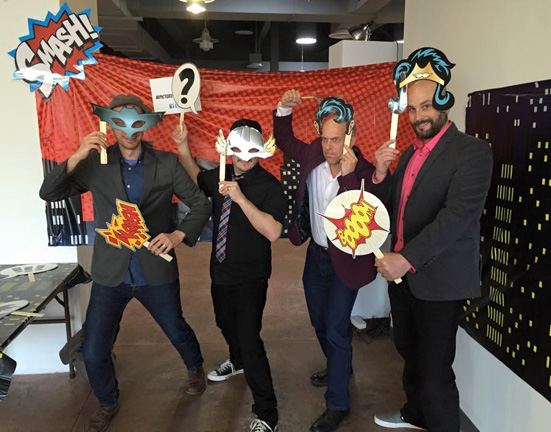 The Avengers of KidLit! 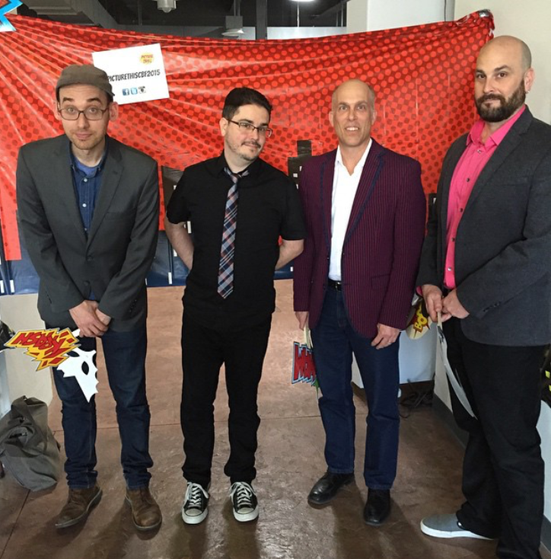 April 10th-12th I’ll be an official guest at the Children’s Book Festival of Johnstown! 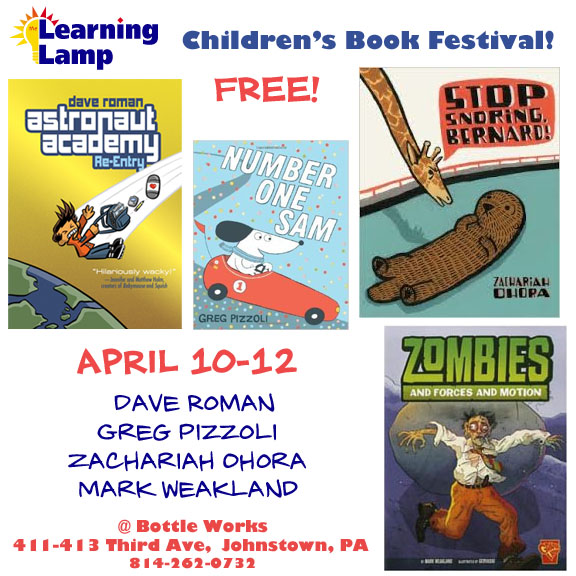 The three-day festival is free and is geared to children in grades Pre-K through 6. Designed to bring books alive in an impactful and lasting way, the festival features performances by nationally-known, award-winning authors, illustrators and storytellers. Named as one of four “Best of the Best” arts projects in Pennsylvania in 2013 by the Pennsylvania Council on the Arts, the festival also includes lots of arts and crafts, live musical and theatrical performances, and new and used children’s books that people can purchase to build home libraries of their own. Every child walks away with a free age-appropriate book from First Book and winners of our bookmark contest take home a basket full of books. Other guests include Greg Pizzoli, Zachariah OHora, & Mark Weakland!

Some photo highlights from March 2015. 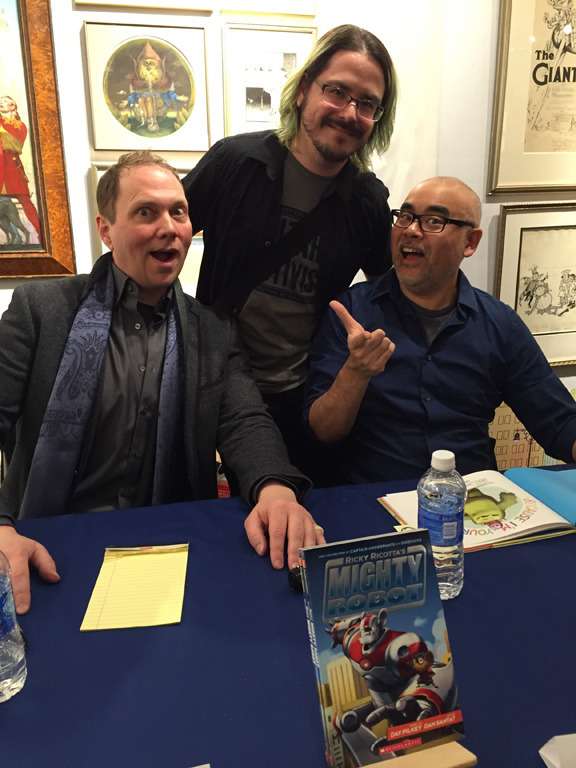 Got to see two of my author heroes, Dav Pilkey and Dan Santat! 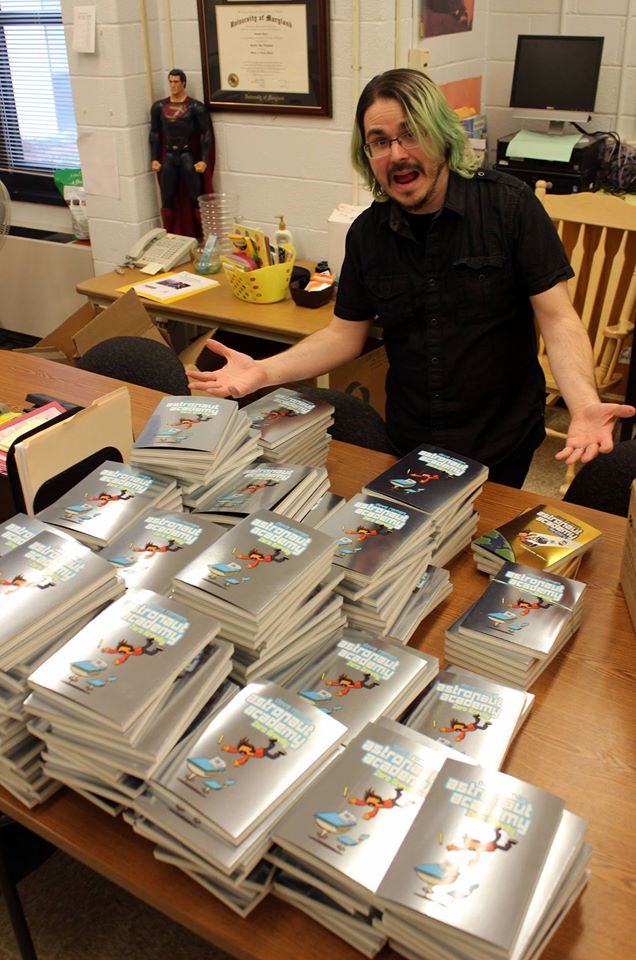 Signed over 200 copies of Astronaut Academy for An Open Book Foundation! Every time I got overwhelmed I just remembered how many books Dav and Dan probably signed over the course of their recent tour. 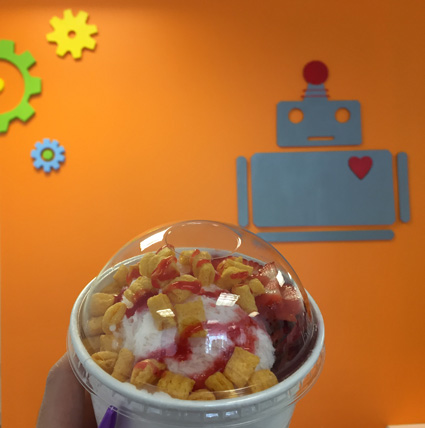 Tried my first snow cream at SnowBots in Rockville, Maryland. Went back and tried it again the next morning. It’s sort of like Shave Ice, Ice Cream and Cotton Candy all in one! 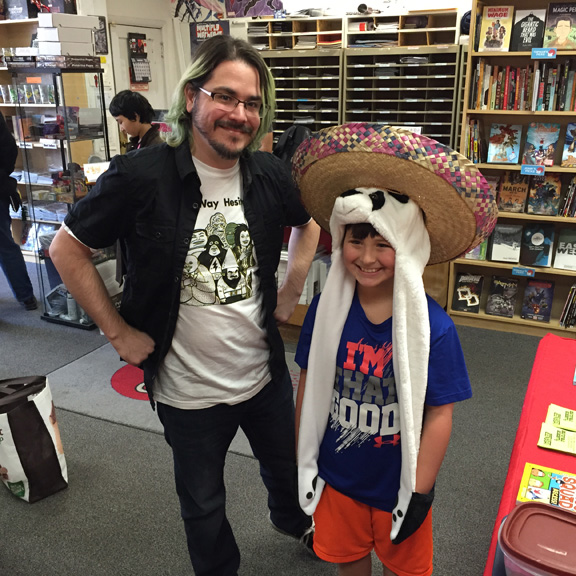 Had a great event at Big Planet Comics that included a surprise visit from a Señor Panda cosplayer! 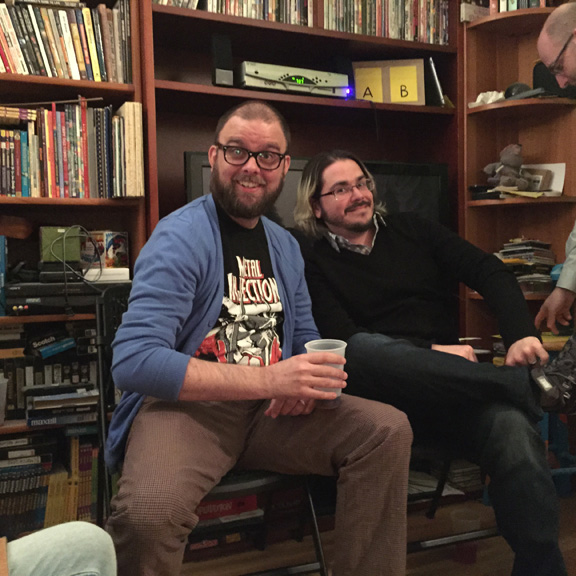 Went head to head against Brian Smith (co-creator of The Stuff of Legend) in Matchgame! 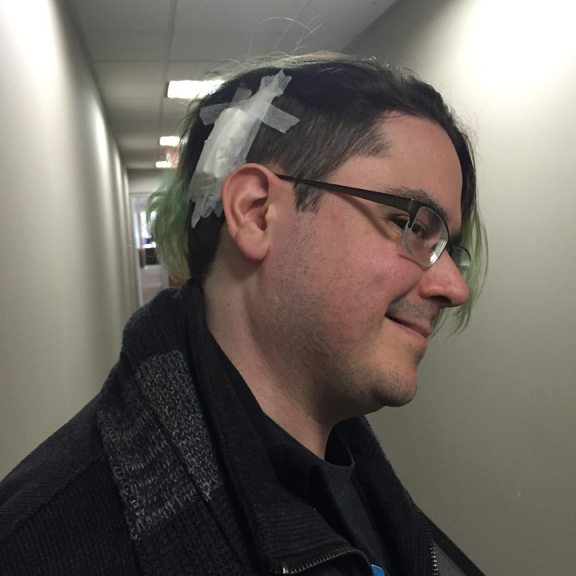 Finally started removing the sebaceous cysts that have been growing on my head! I’ve been putting this off for years and they’ve really gotten out of control. 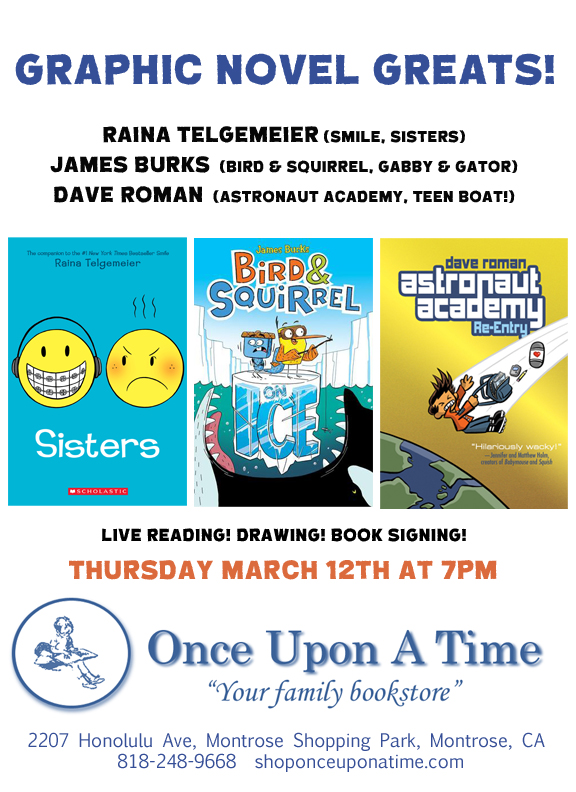 When I was growing up, I used to look forward to winter vacation as a chance to get away from school work…and draw comics! And this winter was just like that, only instead of drawing comics based on my own silly ideas, I was hired to draw my very first comic based on a story written by someone else. And that someone else happens to be R.L. Stine, one of the most successful writers in the world!

So it’s my honor to be adapting “Night of the Living Dummy” for the new comics anthology Goosebumps Graphix: Slappy’s Tales of Horror! I even got to draw the super creepy cover! 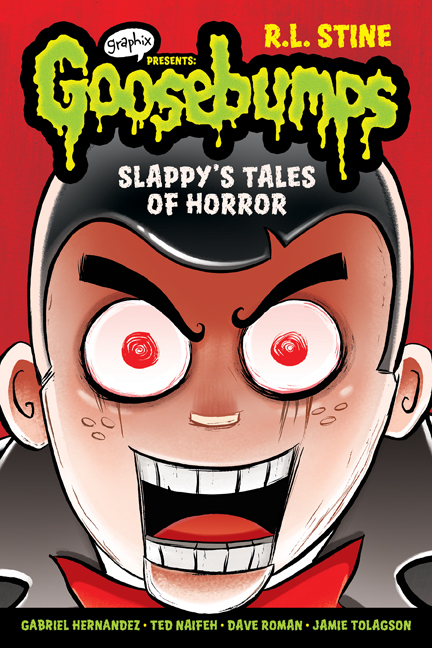 The talented Dave Roman creates the horrifying drawings for “The Night of the Living Dummy,” the origin story about that most evil of all ventriloquist dummies, Slappy!

In “A Shocker on Shock Street,” Jamie Tolagson captures the chilling tale of a brother and sister doing their dream job: testing rides in a movie studio theme park, where the special effects are REALLY special.

With his shadowy illustrations, Gabriel Hernandez creates the perfect atmosphere in “The Werewolf of Fever Swamp,” a spooky story about a boy and his dog who go sniffing around in a lonely swamp . . . and wish they hadn’t.

Ted Naifeh is at his creepy best in “Ghost Beach,” a scary ghost story about a brother and sister who investigate a local legend and discover a terrible secret about their family.

The book comes out in Fall 2015, just in time for Halloween. I’m still putting the finishing touches on the art in my story, but hope to share some process photos and cool sketches closer to the release date.

Be afraid! Be very afraid!