Saturday May 5th, and Sunday May 6th, 2012 at the Toronto Comics Art Festival 2012, we debuted the first ever Comics Quickfire! Part drawing jam, part fast-paced game show, volunteers from the audience were paired off with professional cartoonists in a series of fun-filled drawing challenges! 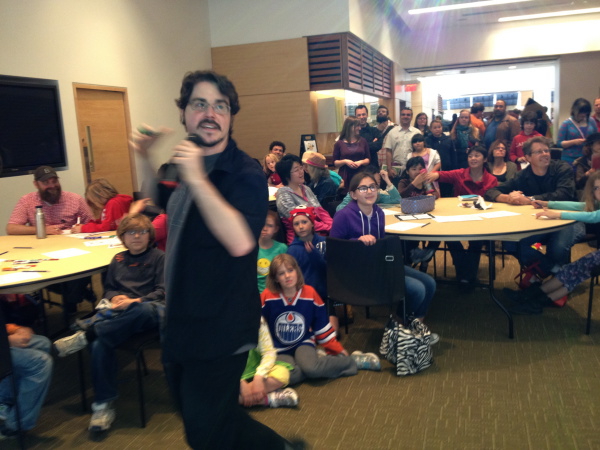 I hosted both days and laid out the rules for the challenges. 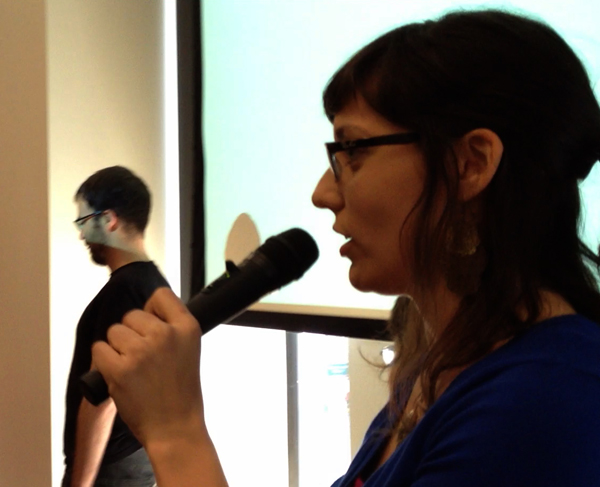 Two volunteers were chosen from the audience. After a coin toss, each kid got to choose which of the participating cartoonists would be their teammates, and also come up with an official team name. 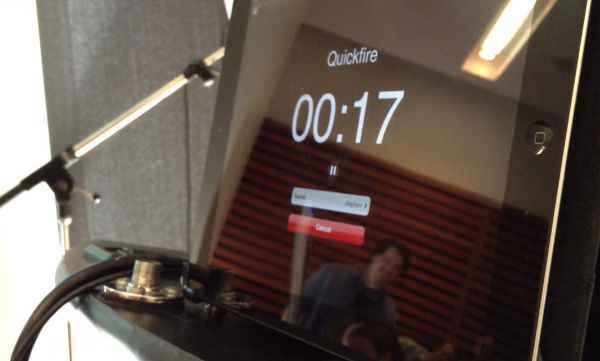 Teams collaborated on a four panel jam comic based on audience suggestions. Each player had one minute to write and draw in the designated panel. 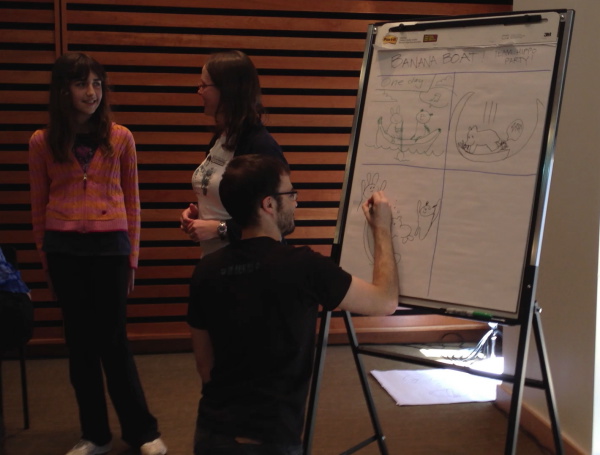 After TIME’S UP, the player had to pass the marker on to teammates who alternated between panels. 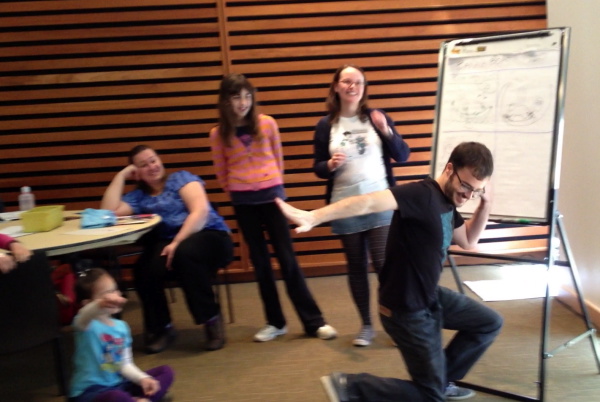 Bob Flynn brought his drawing skills and some smooth moves. 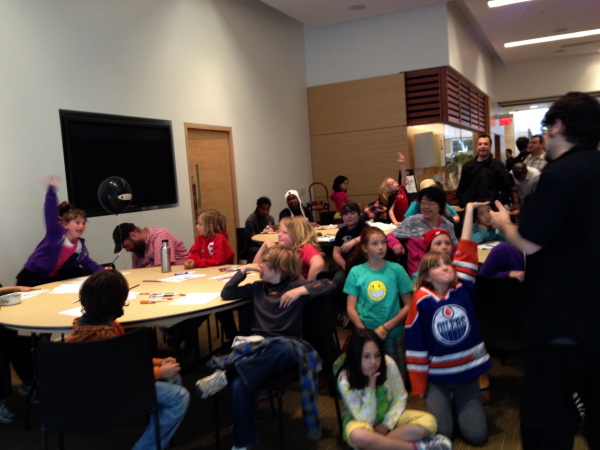 For the third panel, the audience provided a TWIST to shake up the story. 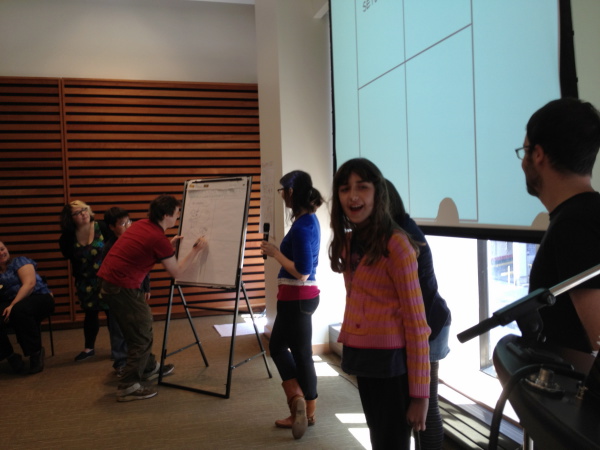 John Green draws a zombie in a bubble gum factory, based on the audience suggestion. 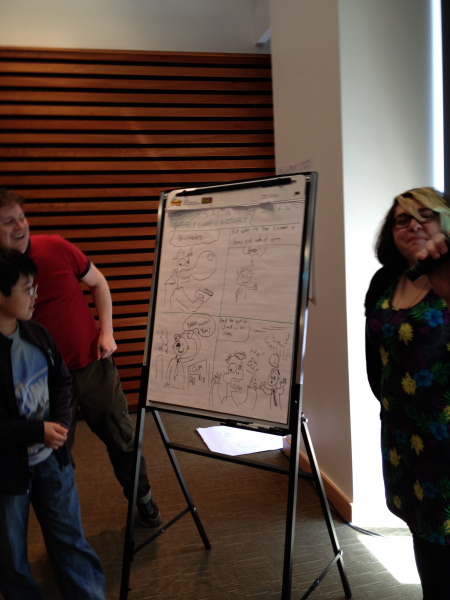 The zombie story gets a lot of laughs… 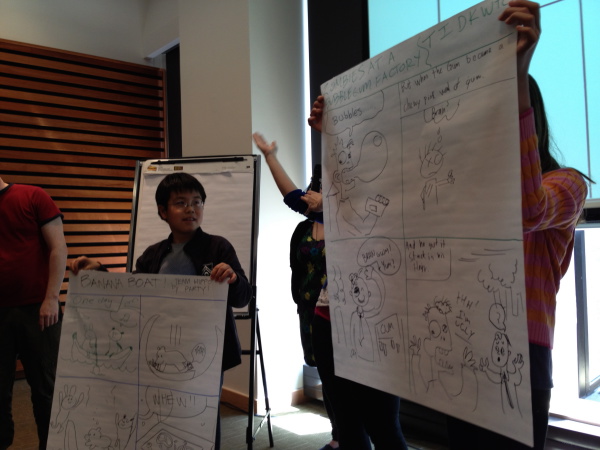 …and the most applause, which meant Team I Don’t Know What to Call It got to move on to the EPIC DRAW! final round. 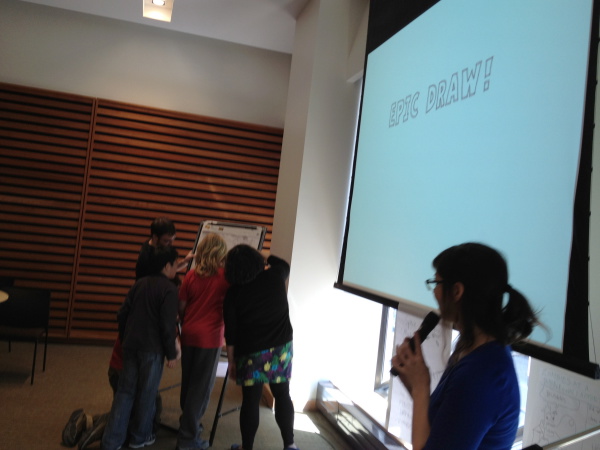 The EPIC DRAW! is a “splash panel” that must incorporate 10 outrageous audience suggestions. 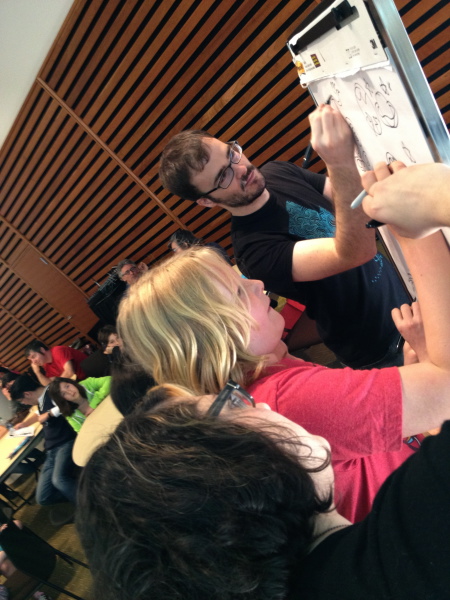 More than one player can draw at once, so things got crazy quickly–it was up to the Team Captain to manage the chaos! 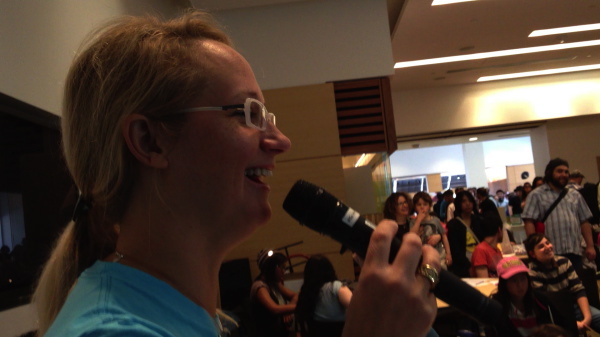 Jennifer Holm (Babymouse) was the co-host! Two new volunteers were chosen to create: 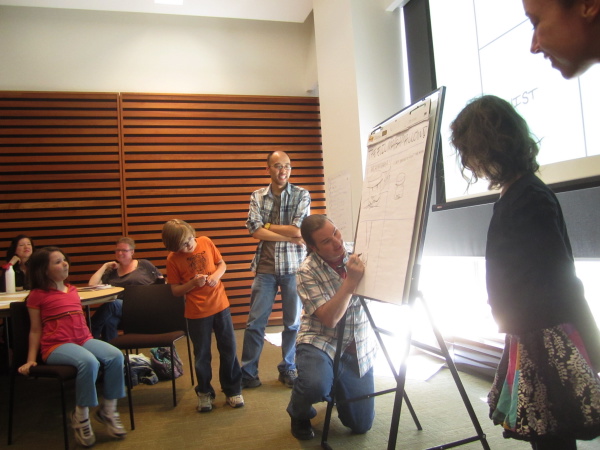 ROUND 1: Matt Holm has to draws the audience TWIST involving an evil marshmallow falling into a giant hole. 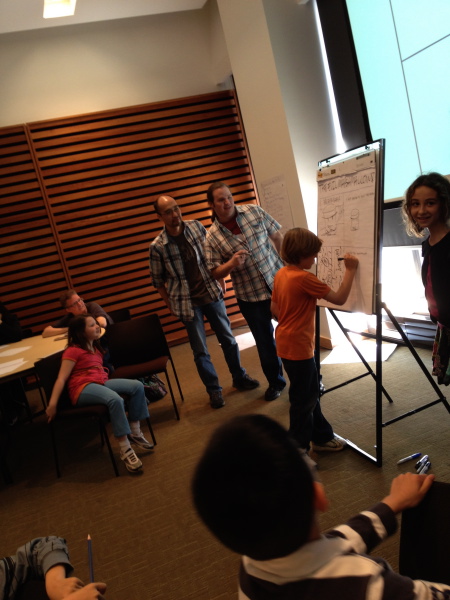 Captain of Team Tiger draws the RESOLUTION panel for their story. 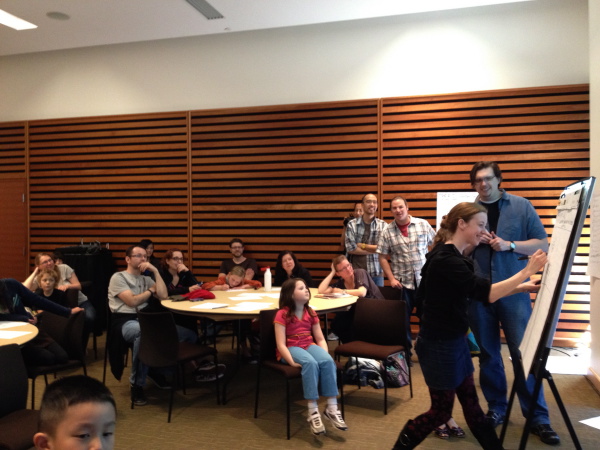 Round 2: Katie Shanahan starts off a new story based on the audience’s suggestion of “The Devious Cat Who Tried to Take Over the Litterbox.” 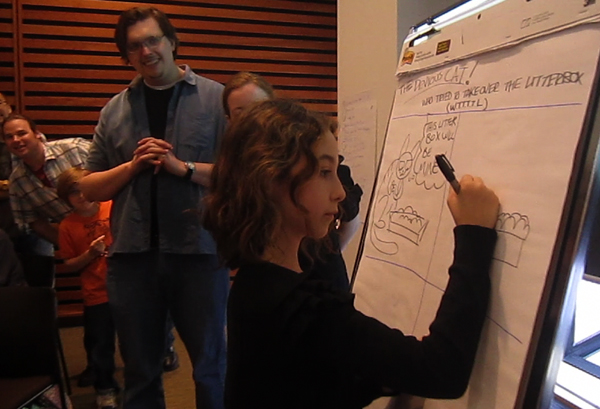 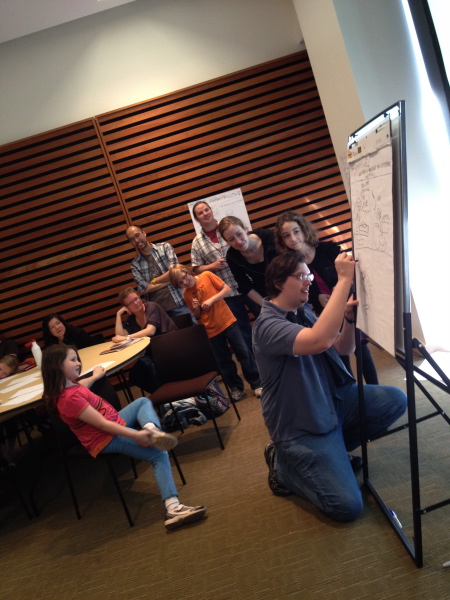 It’s up to Andy Runton the execute the TWIST. 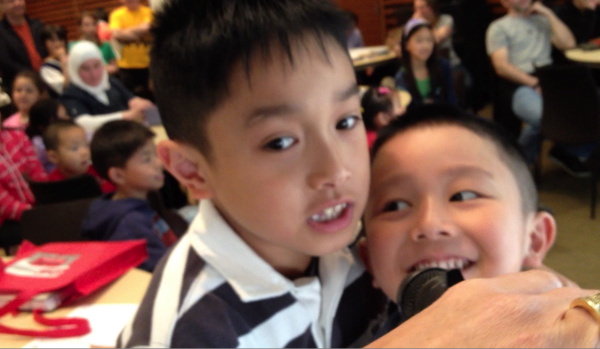 The audience was encouraged to chant along with final ten-second countdown for each panel and then shout, “TIME’S UP!” 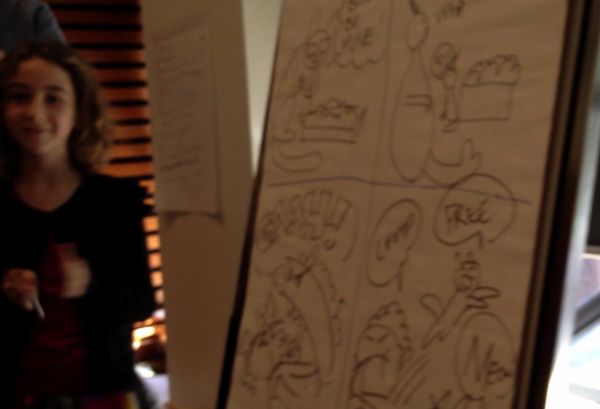 The story of a litterbox getting revenge on a cat was the crowd favorite,
so Team Wizard moves on to the EPIC DRAW! 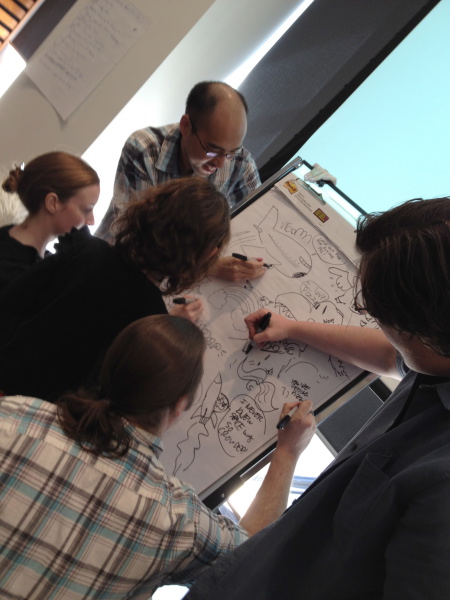 The EPIC DRAW! was possibly even crazier on Day 2!

Each of the volunteers got to keep the drawings they collaborated on and the winning kids each got a gift certificated to Little Island Comics!

Thanks to all the participating cartoonists, TCAF for the awesome venue, Scott Robins for assisting, and Annie Koyama of Koyama Press for providing the generous prizes for the kids!

Maybe the Comics Quickfire! will appear at a book event near you? 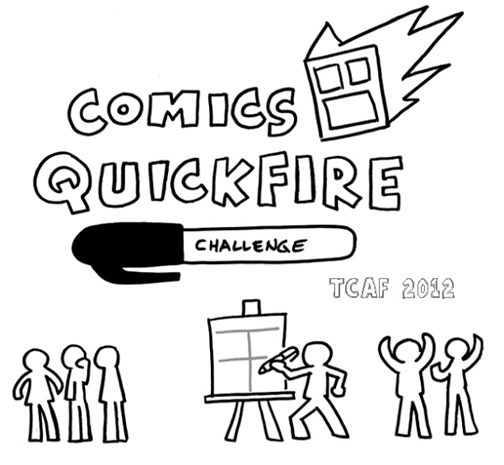