Jax Epoch and the Quicken Forbidden 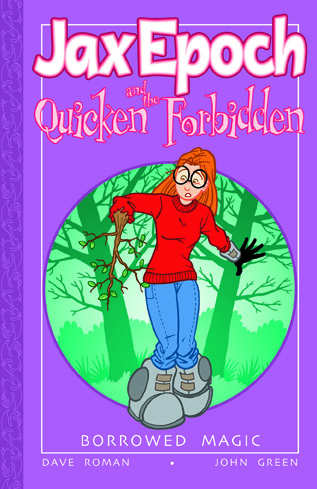 Disappointed with the life around her, teenager Jacqueline “Jax” Epoch accidentally winds up falling through the Realmsend, a passageway into a different dimension. Expecting a lush, fantasy world, she instead finds a barren plain, devoid of the magic she’s dreamed of. When she returns home she finds that everything that was magic in the other realm has leaked into her own, causing her reality to fall apart. Dragons fly over the streets of Manhattan, marshmallows talk back, and her boyfriend dumps her. Now, it’s up to Jax to save both worlds from collapsing! 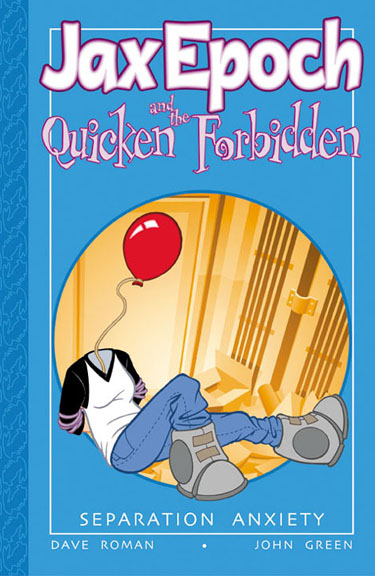 When teenager Jax Epoch “borrowed” some magic items from another dimension, she set into motion a series of apocalyptic events known as the Quicken Forbidden. Now, the stuff of fantasy is invading the real world: snowstorms rage in the summer, mechanical knights ride through the streets of Manhattan, and dragons are forced to get day jobs. Amid the growing strangeness, Jax is put on trial for causing the end of reality – and something is hunting down anyone and anything connected to the Quicken. This is volume 2 of the series, with a new 8-page epilogue.

“Jax Epoch and the Quicken Forbidden is a rollicking Harry Potter-esq fantasy, but it is its sense of humor that makes it glow”
-Craig Thompson, author of Blankets

“Jax’s stories are compulsively readable. They are like mice; you can’t stop at just one. You know, if you eat mice.”
-Jane Espenson, writer/producer of Buffy the Vampire Slayer and Firefly.

“Fast-paced and unpredictable, with the end result that the reader is as breathless as Jax herself”
-Barry Lyga, author of The Astonishing Adventures of Fanboy and Goth Girl

“Imagine an episode of The X-Files peppered with some of the magic and attitude of the Harry Potter books and you get the idea”
-Carol Cooper, SFRevu

“There are only a few fantasy comics that manage to rise above the genre’s clichés and tell a really good story, and Jax Epoch is on that list.”
-Greg McElhatton, iComics.com