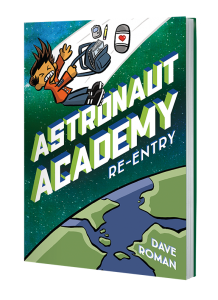 Written and Illustrated by Dave Roman.

The wild and wacky world of Astronaut Academy is back! It’s spring semester at this futuristic institution of learning, and Hakata Soy has lost his heart. Literally. And he’s not the only one . . . something is stalking the halls of Astronaut Academy, impersonating the crush-objects of students and making off with their extra hearts!

Read an exclusive preview of the book at
Astronaut Academy.com

Or, order from your favorite local comic shop!
Visit comicshoplocator.com or call 1-888-COMIC-BOOK

“A sequel just as goofy and sweet as the original book..brings the action-packed story to a satisfying conclusion.”
-Shelf Awareness

“A delightful and often clever voyage that will remind you of middle school even when it’s completely packed with robots and panda bears.”
-iO9

“It was pretty much love at first sight.”
-The Armchair Librarian

One Response to Astronaut Academy: Re-Entry