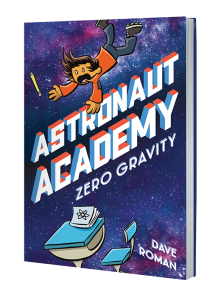 Written and Illustrated by Dave Roman.

Hakata Soy’s past as the leader of a futuristic superhero team is catching up with him, just as he’s making a fresh start at a new school. How can Hakata study for his classes in anti-gravity gymnastics, fireball throwing, and wearing cute hats when he’s got a robot doppelganger on its way to destroy him?

Or, order from your favorite local comic shop!
Visit comicshoplocator.com or call 1-888-COMIC-BOOK

“It’s a fast, fun read…[it has] got such momentum that you just don’t want to stop. That’s what connects [Astronaut Academy and Scott Pilgrim] in my mind; the energy, the excitement, the fun.”
- Robot6/Comic Book Resources

“There will not be a better all-ages graphic novel published this year than Astronaut Academy. Period.”
-Comics Waiting Room