MAX BRALLIER for The Last Kids on Earth
GITTY DANESHVARI for The League of Unexceptional Children
TOMMY GREENWALD for Charlie Joe Jackson’s Guide to Planet Girl and My Dog Is Better Than Your Dog (Crime Biters #1)
ALAN KATZ for The Day the Mustache Took Over
DAVE ROMAN for Teen Boat: Race for Boatlantis and Slappy’s Tales of Horror
NEIL SWAAB for The Secrets to Ruling School (Without Even Trying) 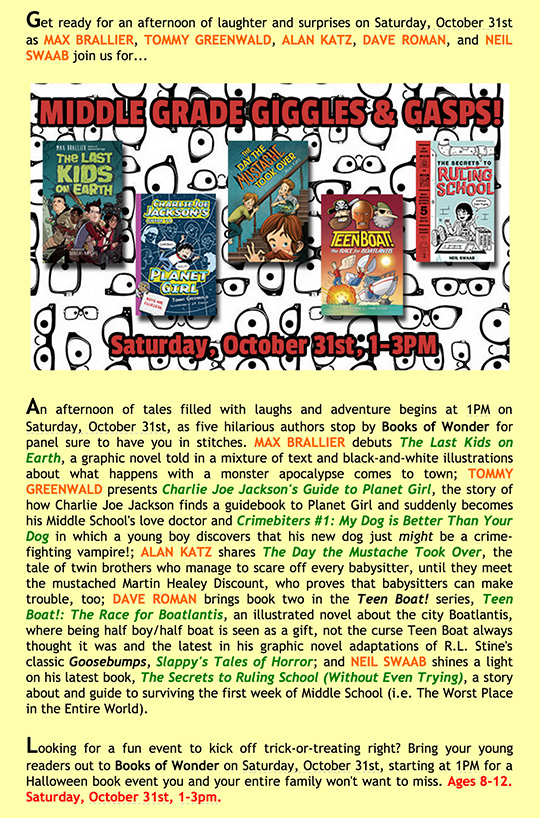 More info at the Books of Wonder website. The store is located at 18 West 18th street (between 5th and 6th Avenues).

Dave Roman is the author of several graphic novels including Astronaut Academy: Zero Gravity, Teen Boat! and Agnes Quill: An Anthology of Mystery. He has contributed stories to Explorer: The Mystery Boxes, Nursery Rhyme Comics, and is the co-author of two New York Times bestselling graphic novels, X-Men: Misfits and The Last Airbender: Zuko’s Story. Roman is a graduate of the School of Visual Arts and worked as a comics editor for the groundbreaking Nickelodeon Magazine from 1998 to 2009. He lives in NYC with his wife, and fellow comic artist, Raina Telgemeier.
View all posts by Dave →
This entry was posted in Blog Entries and tagged book events, Books of Wonder, Goosebumps, NYC, Slappy, teen boat. Bookmark the permalink.