Raina Telgemeier, John Green & I are on the road for the next two weeks and we hope you’ll come out and see us at one of the following stops! 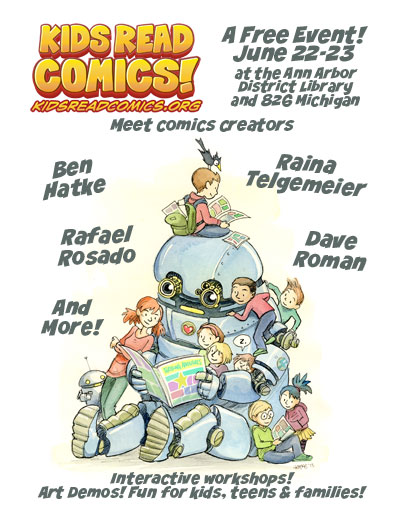 The first ever comics awards voted on by kids. I’ll be the co-host and there will be puppets, cosplay and tons of surprises. So you won’t want to miss it!

Come celebrate the re-opening of this awesome comic shop! 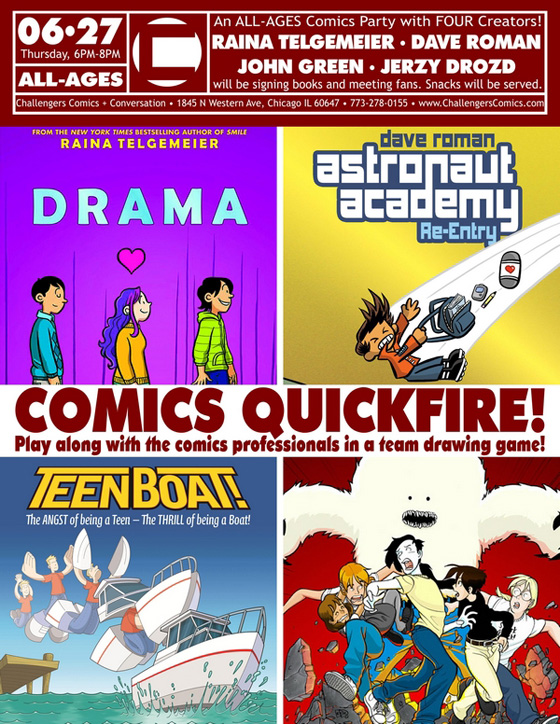 ALA American Library Association Conference
Chicago, IL
June 28th-July 1st
We will be appearing in the graphic novel artist alley and on several panels on the Graphic Novel Stage! Come check out our live comics readings, podcasts, and drawing competitions!

Dave Roman is the author of several graphic novels including Astronaut Academy: Zero Gravity, Teen Boat! and Agnes Quill: An Anthology of Mystery. He has contributed stories to Explorer: The Mystery Boxes, Nursery Rhyme Comics, and is the co-author of two New York Times bestselling graphic novels, X-Men: Misfits and The Last Airbender: Zuko’s Story. Roman is a graduate of the School of Visual Arts and worked as a comics editor for the groundbreaking Nickelodeon Magazine from 1998 to 2009. He lives in NYC with his wife, and fellow comic artist, Raina Telgemeier.
View all posts by Dave →
This entry was posted in Blog Entries and tagged ann arbor, appearances, Chicago, comic shops, michigan, tour. Bookmark the permalink.