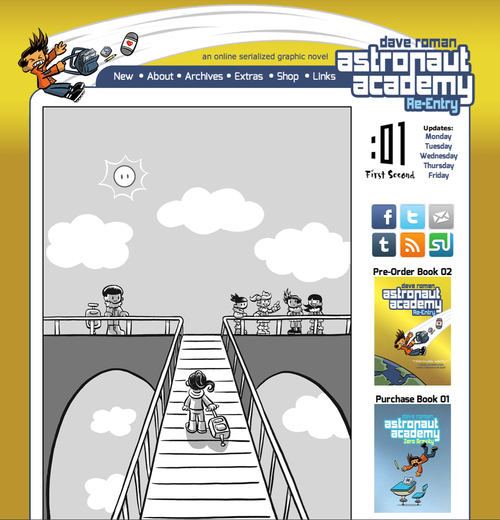 BIG NEWS: My upcoming graphic novel Astronaut Academy Re-Entry has begun serializing online, totally free! It launched with the first 25 pages (an entire winter break storyline) and will update with a new page every weekday. I’ll also be posting commentary, process stuff, and personal anecdotes underneath all the pages. And if that weren’t enough, I’ll be writing a series of “love letters” about all the movies, videogames, manga, pop culture etc. that helped inspire the Astronaut Academy series. A bunch of my friends are also going contribute guest posts to the series as well, so it should be a ton of fun.

I’ve been working on this new book for over 2 1/2 years and it’s been a while since I’ve done any sort of online comics. So I’m a bit nervous and appreciate any and all help in spreading the word is beyond appreciated. And of course, I hope you like it!

Dave Roman is the author of several graphic novels including Astronaut Academy: Zero Gravity, Teen Boat! and Agnes Quill: An Anthology of Mystery. He has contributed stories to Explorer: The Mystery Boxes, Nursery Rhyme Comics, and is the co-author of two New York Times bestselling graphic novels, X-Men: Misfits and The Last Airbender: Zuko’s Story. Roman is a graduate of the School of Visual Arts and worked as a comics editor for the groundbreaking Nickelodeon Magazine from 1998 to 2009. He lives in NYC with his wife, and fellow comic artist, Raina Telgemeier.
View all posts by Dave →
This entry was posted in Blog Entries and tagged AA2, astronaut academy, webcomic. Bookmark the permalink.