Happy New Year!
Time is already flying by as I’ve been furiously working hard on the second volume of Astronaut Academy! I’m still a ways off from being finished, but here’s a snippet of one of the early thumbnail pages: 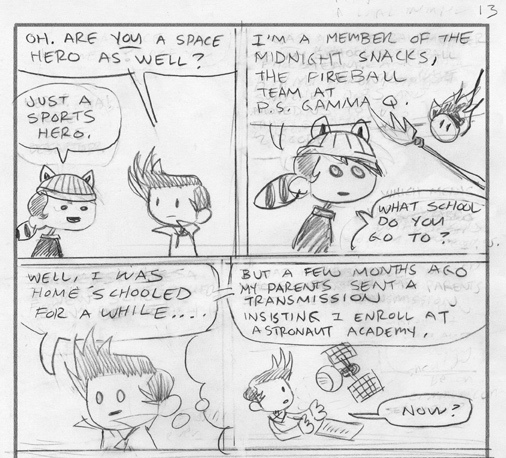 I wrote the entire script for book 2 in this fashion. If you’d like to see the full page, plus what the final version looks like inked and toned, head over to the webcomic Friends With Boys by the talented Faith Erin Hicks. I did a short interview with Faith talking about Astronaut Academy, X-Men and Avatar: The Last Airbender. Friends With Boys will be coming out as a graphic from :01 books but you can read it online totally free!

Dave Roman is the author of several graphic novels including Astronaut Academy: Zero Gravity, Teen Boat! and Agnes Quill: An Anthology of Mystery. He has contributed stories to Explorer: The Mystery Boxes, Nursery Rhyme Comics, and is the co-author of two New York Times bestselling graphic novels, X-Men: Misfits and The Last Airbender: Zuko’s Story. Roman is a graduate of the School of Visual Arts and worked as a comics editor for the groundbreaking Nickelodeon Magazine from 1998 to 2009. He lives in NYC with his wife, and fellow comic artist, Raina Telgemeier.
View all posts by Dave →
This entry was posted in Blog Entries and tagged astronaut academy, book 2, comics, Faith Erin Hicks, process, thumbnails, webcomics. Bookmark the permalink.