Over at the Astronaut Academy webcomic page I’ve been blogging almost every day! And some of the most fun posts have been part of a series called “Love Letters & Heart Containers” where my friends and I write posts about some of favorite things! Here’s some direct links to some of the ones posted so far…

Each article is just below the day’s specific comic page. There will be a lot more posts coming up in the next few weeks, so check back often! 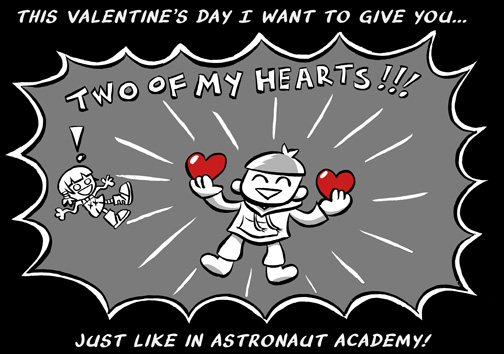 Dave Roman is the author of several graphic novels including Astronaut Academy: Zero Gravity, Teen Boat! and Agnes Quill: An Anthology of Mystery. He has contributed stories to Explorer: The Mystery Boxes, Nursery Rhyme Comics, and is the co-author of two New York Times bestselling graphic novels, X-Men: Misfits and The Last Airbender: Zuko’s Story. Roman is a graduate of the School of Visual Arts and worked as a comics editor for the groundbreaking Nickelodeon Magazine from 1998 to 2009. He lives in NYC with his wife, and fellow comic artist, Raina Telgemeier.
View all posts by Dave →
This entry was posted in Blog Entries and tagged astronaut academy, blog posts, webcomic. Bookmark the permalink.